Manang district is located at an elevation of 3519 m above sea level. The magnificent fusion of numerous mountain peaks, glaciers, passes, valleys and human settlement make it a wonderful place. Our blog is a brief information abour attractions of Manang, Nepal. Manang is surrounded by Gorkha and Lamjung in the east, Mustang and Lamjung in the west, Mustang, Gorkha and Tibet in the north and Parbat, Kaski, Lamjung and Mustang in the south. It is known as the land beyond the mountains.

Manang village is a hidden treasure of Nepal. The high peaks around Mustang halt the rainy clouds to enter the territory of Manang that causes the low rainfall in this region. This is the barren land of Nepal, also known as Desert of Nepal. It feels like heaven to be here, the astounding sceneries and local lifestyle consolidate more beauty to this rural land. Comparing to other nearby regions, Manang is more wealthy due to the incredible natural resources, artefacts, herbs and gems, culture and traditions. There are many monasteries in the Manang region. The influence of ancient Tibetan Buddhism practices and devotion can be seen in this place. Manang is the real heaven of Nepal. The local settlement, mountains and glaciers, the surrounding makes an unforgettable experience in this wonderland. 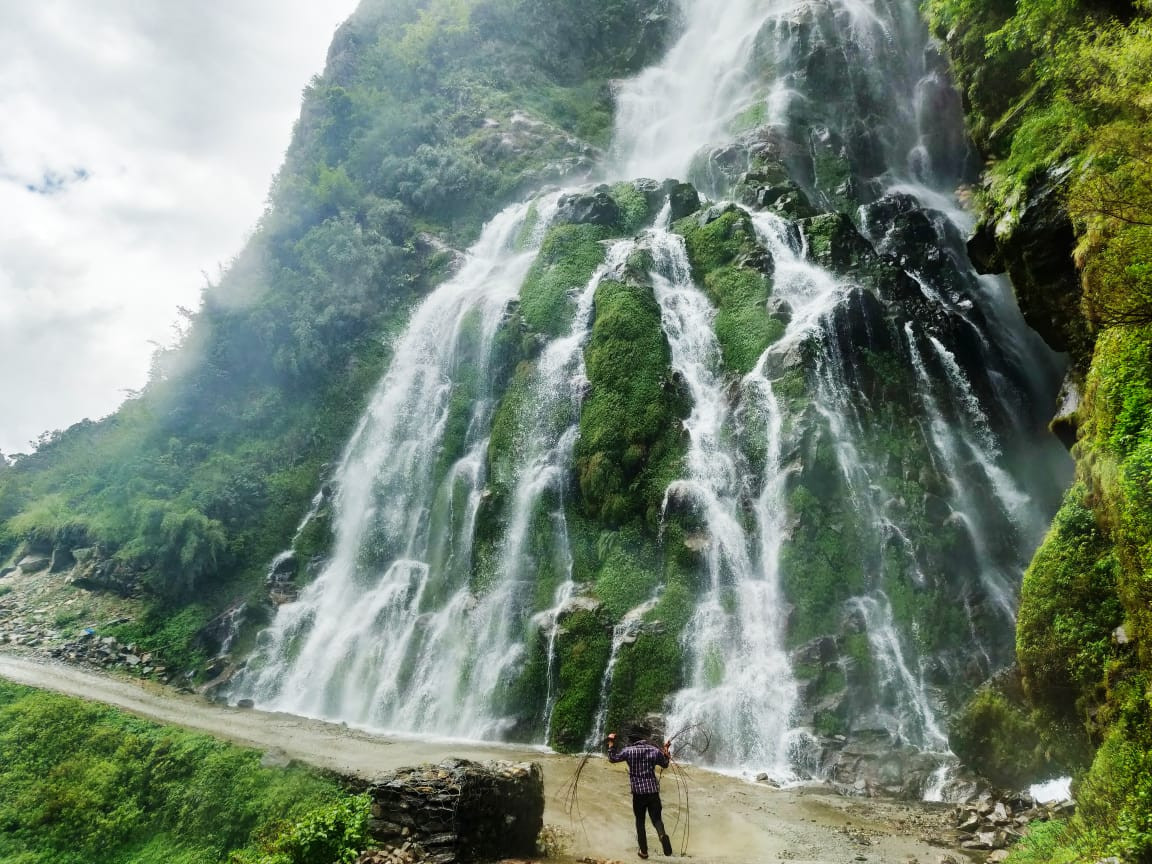 The fusion of Tibetan and Nepali culture is prevalent in this region. Language is also influenced by Tibetan culture. The people here have their own cultural attire, and traditions. Majority of people here follow Buddhism and there are several monasteries in Manang. It is believed that Milarepa’s Cave or Namkading Cave is the place where Tibetan Buddhist philosopher spent his entire life doing meditation during the 11th century. This place is also regarded as an ancient and historically important place of this region.

Braga Bhojo Gompa is a Buddhist Monastery situated in Manang district. The idols and statues of Buddha in a peaceful meditation alike environment is the main attribute of this monastery. The green plain meadows around the Tibet-Nepal corridor adds more attraction to this region.

Manang is a beautiful district with lots of natural attractions. This beautiful village is surrounded by high peaks and villages. The Annapurna massif circuit lies around this region. Besides the spectacular, barren and colourful peaks, the mountain ambience is very wonderful.  The moisture is low because of low raining, so does the vegetation. The Thorong- La- Pass, one of the highest pass lies in Manang. 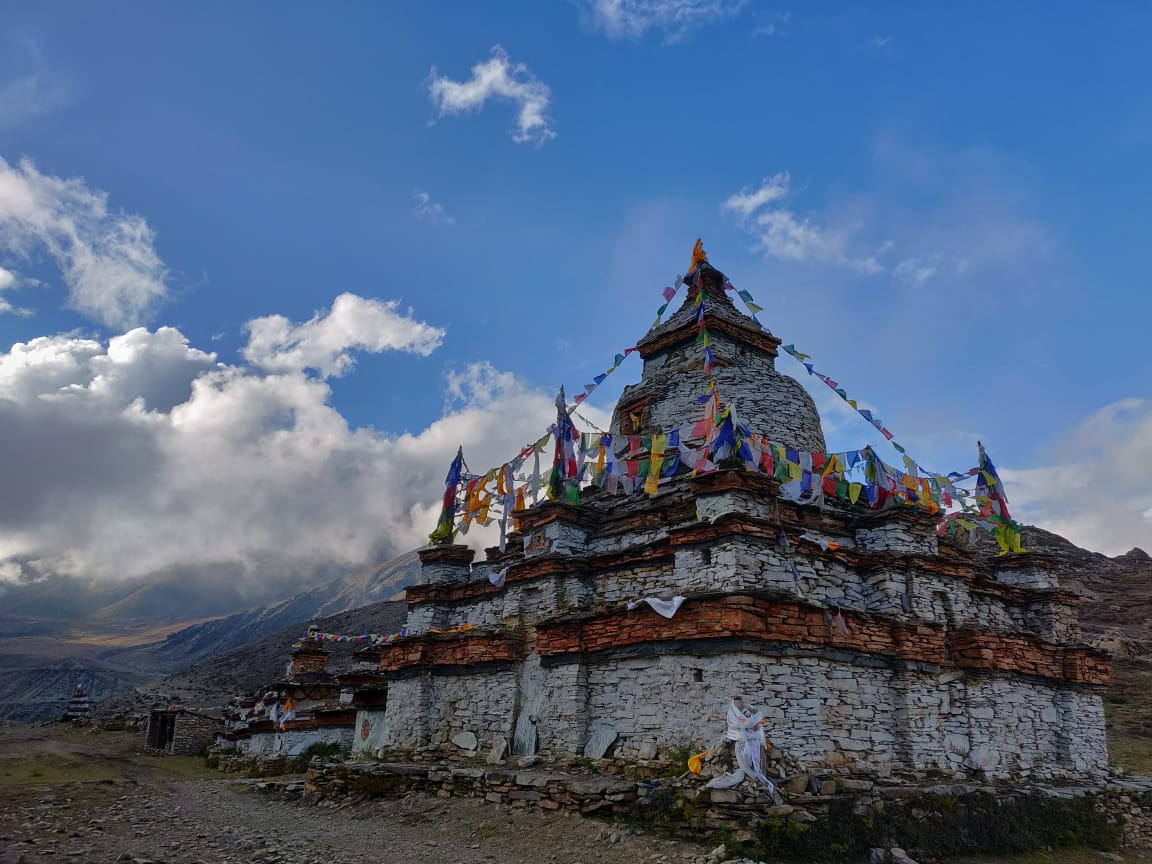 The ancient 11th-century Monasteries and Stupas, undiscovered valleys, trekking trails and the world’s highest altitude lake-Tilicho Lake lie in Mustang. It is also considered to be an ancient Trade route between Nepal and Tibet. At the Nepal Lhasa border, the mesmerizing natural beauty along with the astounding peaks offers the mind-blowing experiences. Full of attractions, yet undiscovered Manang region offers the world’s finest natural settlement in the lap of Himalayas

Thorong La Pass is a common route for connecting many villages in Mustang region (at the height of 17769 ft). It is one of the highest passes in the world. It connects many villages to Manang, among them Muktinath and Ranipauwa villages trek are popular. Thorong-la Pass is the longest (300 KM) subway that lies in the ACAP (Annapurna Conservation Area Project) trekking area.

Similarly, Kang -la Pass is another pass lies in Manang district that leads to Chulu East Himal and join to the ACAP trekking route near Nar-Phu valley.

Passes are very unique here because trekkers walk in the rhythm of Yak bell step by step on narrow and gravel pave on high altitude. At the daytime, because of heavy wind, it becomes hard to indulge in outdoor activities. That’s why the trekking in this region is best if done in the morning. The weather conditions before trekking should be checked. The unpredictable weather conditions might lead to harsh experiences.

Manag regions offer the finest trekking experience. The spectacular views, sceneries and astounding natural beauty make a wonderful place to visit. The trekking in the Manang region offers a wonderful experience. The Manang is full of adventure. The trekking, or mountain biking, it lasts and ends up being an amazing lifetime experience in the beautiful terrains of Nepal. Manang offers a distinct experience with lots of adventure and natural beauty.
In Manang, there are lots of trekking options available depending upon the time and destination.

Nar Phu is an isolated valley. It is an undiscovered remote valley at high altitude to 13944 ft. Buddhist is the main religion and not much open up to the world. Covered by high peaks and harsh climate is the challenge to this valley. It lies in the north region of Manang, neighbouring the Annapurna Summit. The ancient Buddhist region, influenced by the Tibetan culture, is prevalent in this region. This trek was opened in 2002, but it is largely untouched by the modern world. This is the hidden gem of Nepal. The cultural values with the mix of natural attraction in a settlement, it offers truly one of the wonderful trekking experience. 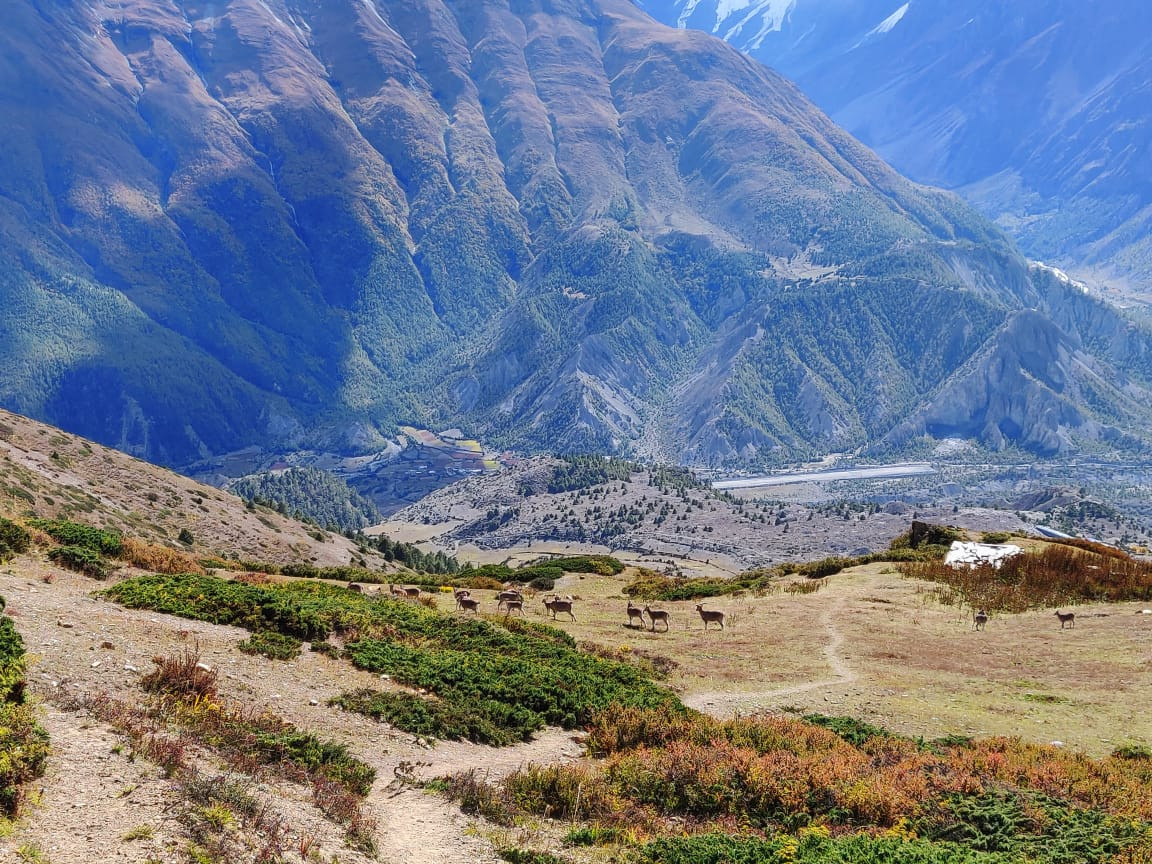 It has emerged as a camping site with beautiful flora and faunas. The Kang la pass is a significant place during the trek as it gives a chance to see a myriad of peaks including Annapurna II(7937m), Himlung Himal, Gangapura (7455m) and Tilicho Peak (7134m). The snow leopard can be spotted in this region. The Neysang Valley lies on the way to Kang La pass after Nar Phu valley. It also offers the spectacular beauty of rural settlement and wonderful Himalayan beauty.

The trek starts at Besisahar and leading trails taking to the remote Nar and Phu valley, emerging the traditional Annapurna Circuit. Bypassing the deep canyons and gorges along with the Chorten and prayer stones, spending time observing the lifestyle of natives and staying at Nar monastery give a wonderful vibe in the rural settlement. This trek offers the great alpine sceneries with medieval Tibetan culture and majestic Himalayan views. This area is protected by Annapurna Conservation Area.

Rich in Natural Herbs and Spice

The meditational vegetation and herbs are other attributes of this region. Manang export precious gems, herbs, expensive metal and musk. About 91 different types of herbs are grown in Manang including Yarchagumba, ‘the Himalayan Viagra’ much expensive than gold. High quality of musk, spices and herbs are exported worldwide from this region. 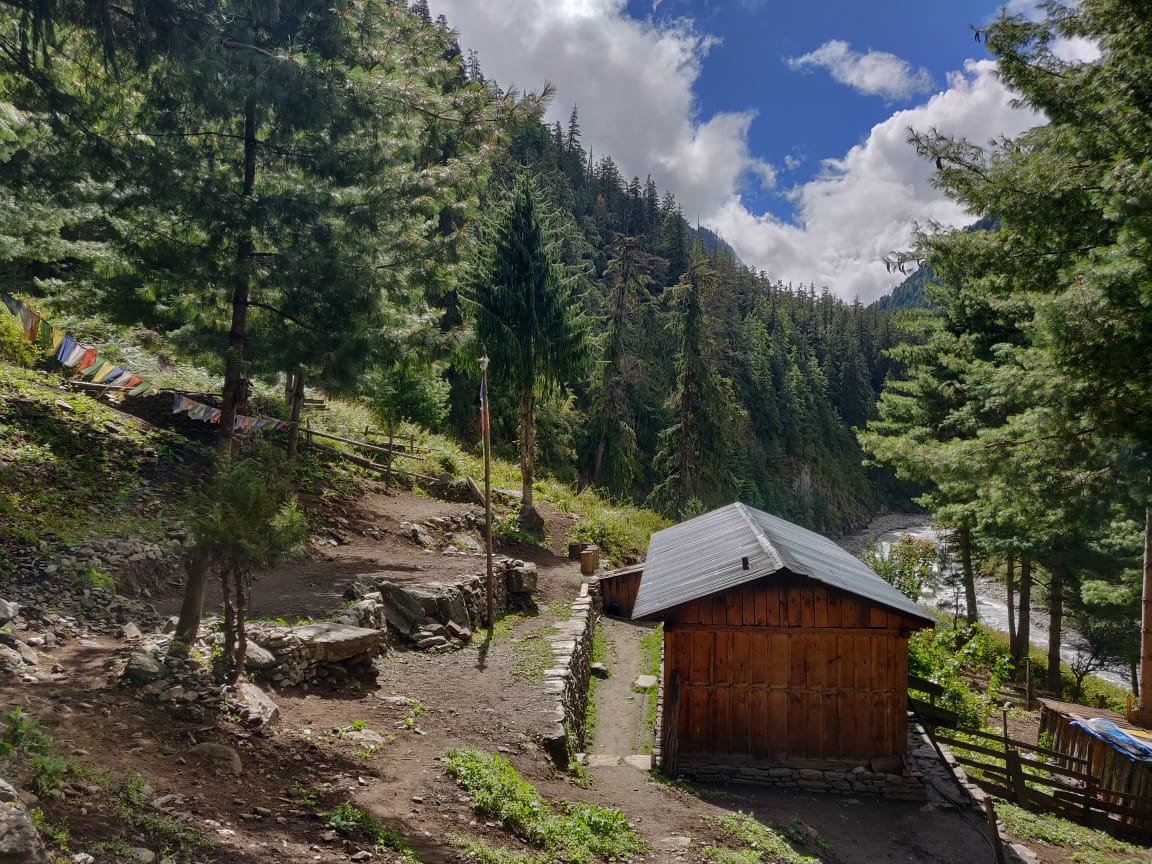 As the temperature is lower throughout the year, people leave their house for six months in winter to escape from the frosty cold. In winter Manang becomes a human-less village. They migrate to relatively warm places for animal husbandry and trade. Many of them came to Kathmandu and other rich cities for merchant purpose and those who look after the livestock they stay in Kharka, plain greenery meadow down about a few hundred feet.

Tilicho Lake is of the wonderful lake situated at the highest elevation in this world. It is situated at an altitude of  4919m. It is also one of the most famous trekking points that falls in the Annapurna Conservation area.
While starting a journey we can see the amazing natural scenery. Walking through a narrow and muddy lane with Yak and local peoples adds a unique flavour to your journey to Tilicho lake. For the trekking purpose,  people need to carry heavy calories dry foods so that you can gear up and maintain instant energy for the journey. Cool air with crystal clear panoramic view of nature is amazing. On the way, the finest deep gorge and high peaks and Massive Annapurna range add more excitement in the journey. 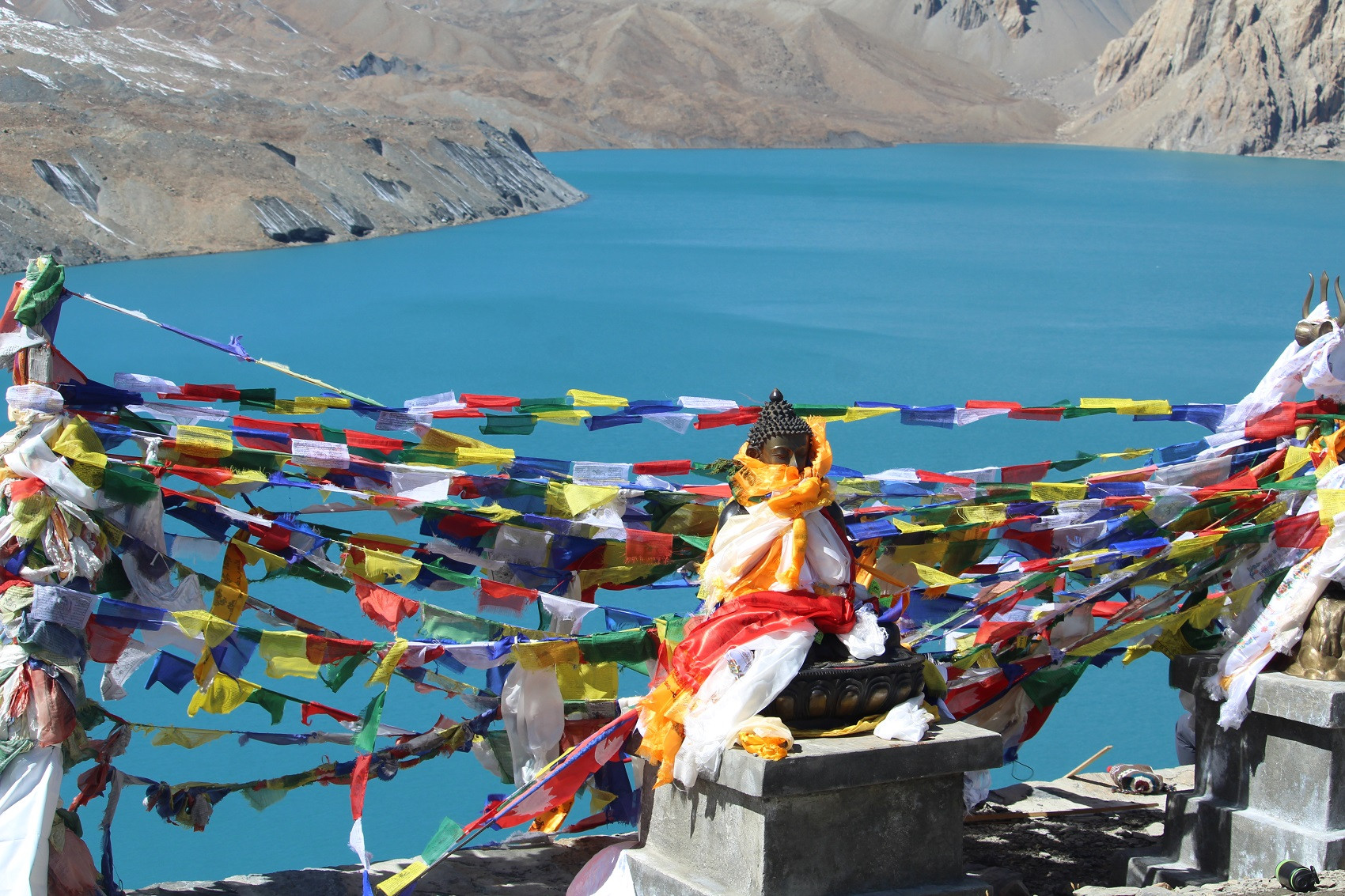 The Journey starts from Chame and continuous walk in the bank of Marsyangdi river with viewing the fantastic Manaslu and Himchuli Peaks in the East. Several ups and the down lean and thin road lead us to many amazing places. The surrounding on the Tilicho Lake is beyond imagination. Arid and colourful peaks, strong wind with picturesque scenery are mind-blowing. The desert-like vegetation and the entire surrounding makes an overwhelming experience. Once reaching to the destination we can see the mesmerizing view of Mountains like Nilgiri, Khangsar and Muktinath Peak. We can also see the silent blue Tilicho lake containing fresh water. The Phra Glacier is another attraction of Tilicho Lake.

The trek starts from Chame and the trail leads to Pisang, Manang. The Khangsar village along the trail is amazing. The rural lifestyle can be seen in this village. Further, the trail leads to Tilicho Base Camp, leaving the Tilicho lake (5200 m) ahead. Best time to visit this region is March-May and September- November. At this time temperature will be moderate and wind remains calm.

Lying in the Annapurna Conservation Area, trekkers need to get ACAP permit to enter this region. Also, some restricted areas like Nar and Phu valley, trekkers have to get special consent and permit. Some safety measures and permits should be taken before trekking in this region. Also, the favourable time to visit this region in March, April, May, August, September, October, and November. However, some understanding about weather condition, rules and regulations will be beneficial for the trekkers.

Similarly, ACAP permit is required to enter the Annapurna region. The ACAP permit costs NPR 3000 (30 USD) for individual trekkers. It's free for the child less than 10 years old. Also to enter restricted areas, another permit is required. The restriction permit to enter Nar Phu Valley costs around 90 USD for 7 days in the months of September to November whereas in December to August it costs 50 USD.