Cambodia is a Southeast Asia country with an area of 181,035 square kilometres which is bordered by Thailand to the northwest, Laos to the northeast, Vietnam to the east and Gulf of Thailand to the southwest. Buddhism is the most followed religion, about 97% of people follow Buddhism. Others are Islam, Christianity, and tribal animism. Cambodia is largely a land of plain and a great river. Its unique geological features of this land add a new glamour to the country and also the influence of Asian culture is found.

The capital of Cambodia is Phnom Phen with 1.5 million population, also it is the largest city and centre of politics, economics, and culture. About 97% of People follow Buddhism. In Cambodia history, religion has a major source of cultural inspiration. People of Cambodia have a unique culture and many rituals. Besides this, it has many amazing places with its extravagant natural beauty such as Angkor Wat, Bayon Temple, Seam Reap, Kbal Spean, Phnom Phen, etc.

Angkor Wat Temple is the national symbol of Cambodia. It is the most amazing and the largest of all Angkor temples which is the topmost tourist destination in Cambodia. It is the home of the gods in Hinduism. It is located in Siem Reap and the arrangement reflects the traditional Khmer idea of the temple mountain, in which the temple represents Mount Meru. It is dedicated to the Hindu god Vishnu and also the largest religious monument in the world with an of 162.6 hectares. Angkor Wat is listed in the world heritage site by UNESCO.

Bayon Temple is the famous destination and richly decorated Khmer temple at Angkor in Cambodia. This temple is one of the most mysterious temples of Angkor Wat. Its elements are placed closer to each other to create harmony and balance. Its most special feature is the serene and the smiling stone faces on the many towers. This temple has both mythological and historically significant and listed in UNESCO by world heritage sites.

Located in northwest Cambodia, Siem Reap is the capital of Siem Reap province. Siem Reap is a resort town and a gateway to the Angkor region. Around the old market and the french Quater, Siem Reap has Chinese-style architecture. The city offers traditional Apsara dance performances, silk farm souvenirs, and handicraft shops, a Cambodian cultural village, fishing villages, and a bird sanctuary. Siem Reap has become the most popular tourist destination as it offers the best hotels. Resorts, restaurant and also a business hub. Also, one of the reasons for getting a popular tourist destination is the gateway to Angkor temples.

Located in Siem Reap province, southwest of Kulen Hills and to the northeast of Angkor, Kbal Spean is an archaeological site. There are series of rock carving in sandstone formation of river bed and banks, so it is known as “Valley of a 1000 Lingas” or “ River of a 1000 Lingas”. The images in the stone are mostly the symbol of Hindu god Shiva and also other gods: Vishnu, Lakshmi, Rama, And Hanuman, as well as the animals. The images carving in the river bed are visible clearly as the water level in the river decrease. The main theme of this sculpture is Hindu Mythology. Some famous places are River of Thousand Lingas, Temple of Banteay Srei, Landmine Museum, Butterfly garden restaurant etc.

Phnom Penh is the south-central region of Cambodia with a tropical wet and dry climate. It is the capital of Cambodia and has become the nation’s economic, industrial and cultural centre. This city is known for its amazing architecture, both ancient and from French colonial times. The greatest charm of the city is that it has not been westernized and some top famous attractions are Phasar Thmei (central market), Sisowath Quay, Royal palace of Combodia, Wat Phnom, National Museum of Cambodia, Russian Market, Independence Monuments, Wat Ounalom, etc.

November and April is the best time to visit Cambodia, during this time there are a little rain and clear blue skies making which makes a great time to enjoy on the southern coast.

Cambodia is a gateway to adventures as well as a religious and historical country that offers you breathtaking scenery with the kindness of people. This is just a small package, we do customize every kind of packages as per clients’ choices. Contact us and let us know your decision, so that we can make your holiday meaningful and unforgettable with our quality service.

MORE THAN HAPPY TO CUSTOMIZE YOUR PREFERENCE 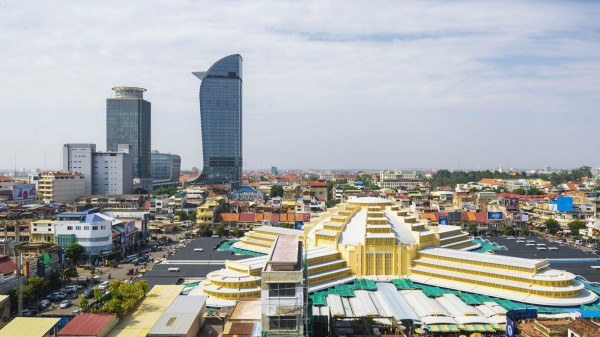