It is believed that after the great battle of Mahabharat, Pandavas (5 brothers) who fought and won against their cousins Kauravs (100 of them) wanted redress of their sins and sorrows for the loss of lives during the war and wanted to offer their praying to Lord Shiva. Lord Shiva roaming around Kedarnath wished not to grant them off the forgiveness took the incognito bull form whilst Pandavas realising that it was Lord Shiva tried to tame down the bull holding its tail. Destined to happen, the head of the bull was separated from his body and was not located in the same locality.

Doleshwor Mahadev Temple is one of the sacred Hindu religious sites of Lord Mahadev.

The torso of the bull is the Kedarnath and the head that was separated is Doleshwor Mahadev in Nepal. Pandavas were frightened as they thought it was atrocious from their end and started praying to Lord Shiva for forgiveness. Meanwhile, during their prayer chanting, they heard the heavenly voice stating that if they wish to meet Lord Shiva they are to visit Doleshwor Mahadev in Nepal. This is backed up by the fact that near Doleshwor Mahadev there is a “Pandava Dhunga” (Pandava Stone) east of the Poukhel around Doleshwor Temple. Until 22nd of August 2009, Pashupatinath Temple was considered as the Head portion of Kedarnath until declared by the Head priest of Kedarnath Temple Shree 1008 Jagat Guru Bhimashankarling Sivacharya. 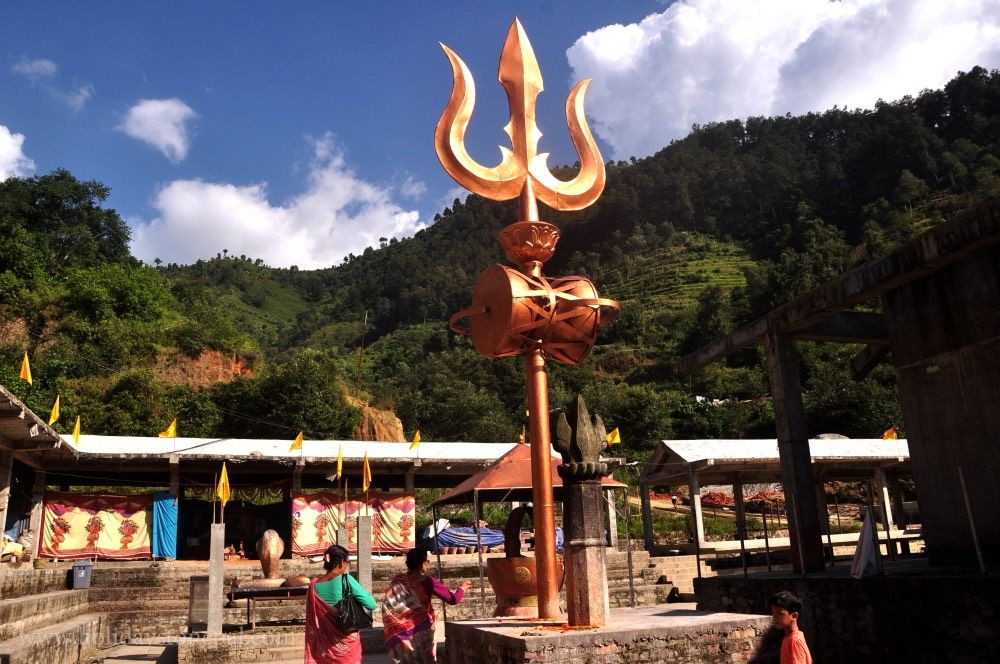 Doleshwor Mahadev has similar characteristics to that of Kedarnath. Also known as Bimaleshwor Mahadev and Sipaaro Mahadev, Doleshwor Mahadev Temple dates back to the existence as long as Kedarnath Temple that is around 4000 years ago as stone idol of Lord Shiva both in Kedarnath and Doleshwor is same material and the angle that the bull was being tamed by Pandavas in Uttarakhand came under the velocity that is matched as per the ancient books Shiva Puran and other proverbial beliefs that have been passed generations to generations.

Doleshwor Mahadev temple is going through major reconstruction after the devastating earthquake of 2015 of Nepal. The master plan for the reconstruction of Doleshwor is underway and is likely to end by 3 years i.e. within 2020 with the major temples of Bishnu, Ganesh around the main temple.

It is around 6 km inside of the Araniko highway through Jagati and nearby the Suryabinayak Temple. Public Transportation is well connected with the blacktopped road however the frequency for the vehicle movement is less as the population density around this area is low. The main attraction to see in this area is the blend of the urban lifestyle well mixed up with the rural lifestyle along with the natural vegetation for which Bhaktapur is famous for.

Doleshwor sees the number of a pilgrimage around the month of Shrawan (July-August) and Magh (January-February) and on a special occasion like Shivaratri, Teej. On regular Mondays and on Saturdays the visitors are high in number. One can feel the serenity of the environment as it is away from the crowded area of the city and relish the divinity.