Seto Machhindranath Jatra is one of the biggest chariot festivals celebrated inside Kathmandu valley. It is a three-day-long chariot procession honouring the god of rain. It is a very vibrant festival of Nepal. The festival is also known as Jana Bāhā Dyah Jātrā. The chariot of Seto Machindranath is pulled from place to place during these three days. Each day when the chariot reaches its terminus, a group of soldiers fires their rifles into the air.

According to the myth, during the regime of Yakshya Malla, the king of Kantipur, people used to bathe in a holy river and visit Swayambhunath which was believed to possess the power of sending people to heaven after death. Once Yamraj (God of Death) came to know the power of Swayambhunath and visited the holy temple immediately. During his return from the temple, he was captured by King Yakshya Malla and his Guru who possessed powers and demanded immortality.

As they didn’t let Yamraj escape, he prayed to Arya Awalokiteshwor (Seto Machhindranath) to free him. God heard his prayers and immediately appeared from the water. The god was white in colour with his eyes half-closed. He told the king to form a temple where Kalmati and Bagmati met and to organize chariot procession so that God could visit the people and bless them with contentment and long life. Since then, people started to celebrate this 3 days long procession to honour the god.

The Seto Machhindranath is believed to have appeared in a pond, which is in present-day known as Rani Pokhari.

On the first day of the festival, the icon of Jana Baha Dyah is removed from his temple at Jana Baha. It is carried in a movable shrine to Durbar Marg, which is the place to start the procession. In Durbar Marg, the chariot is pulled through Jamal and Asan, where it finally makes an overnight cessation. The next day, it is passed through Indra Chowk to Kathmandu Durbar Square. In the final day, it is pulled from there through Maru, Chikan Mugal to Mugal, where it makes three rounds of the Jana Baha Dyo temple. After this, it is conceded back to the temple of Jana Baha, and then is disassembled and the parts are kept for the next year. 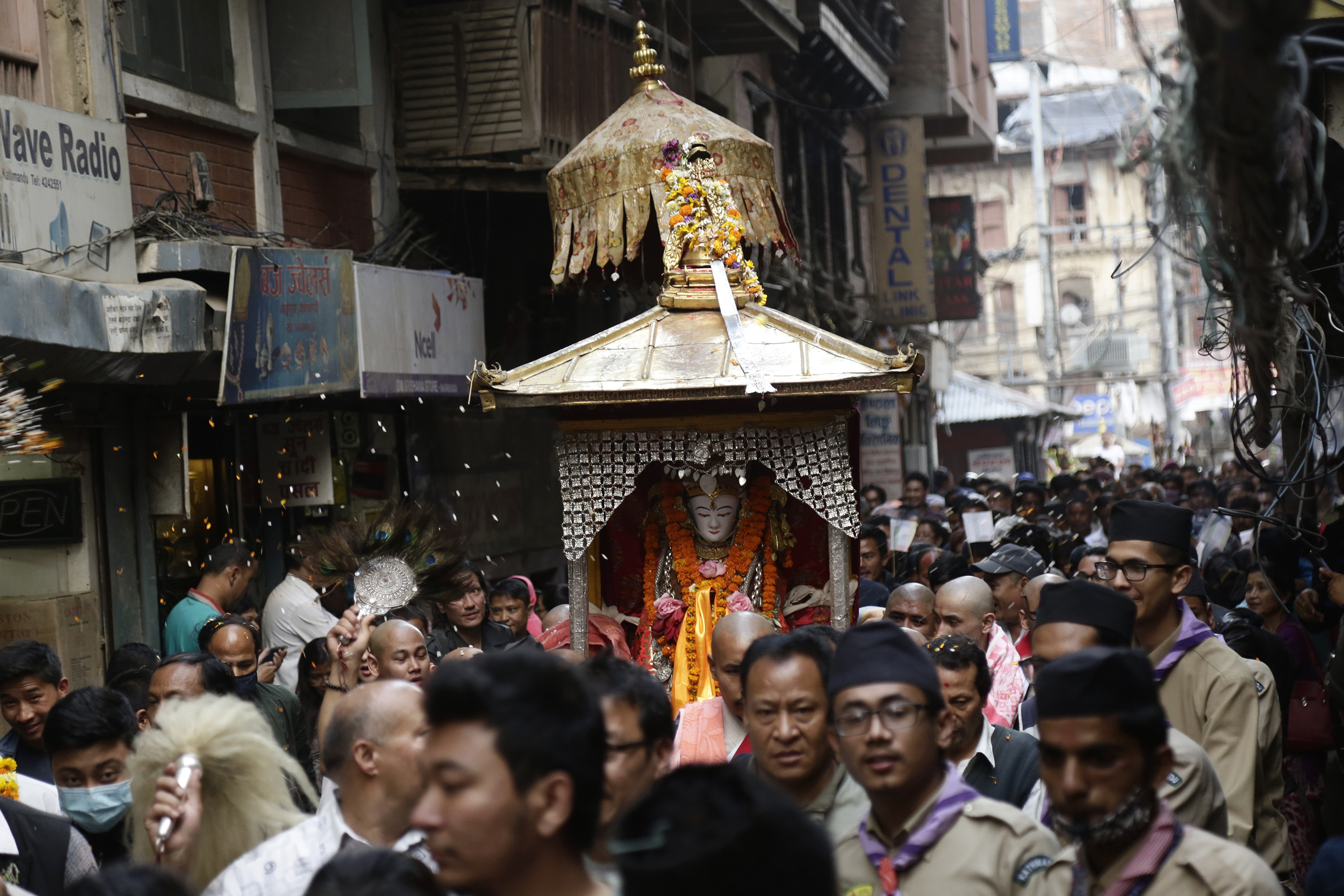 People from all around Kathmandu come to witness this amazing procession. Since they have strong faith in God, they offer prayers and flowers to the Chariot. The Chariot is pulled by so many people and it is believed that many wishes will be fulfilled if you are part of pulling the chariot procession.

The Seto Machhindranath Rath Jatra in Kathmandu is one of the best chariot festivals. People here prepare delicacies and with a mass of cultural groups celebrates the Jatra and the chariot procession is carried out.

This Jatra falls in the month of March. The spring season is a very wonderful time to explore the beauty of Nepal as well. The celebration of the Jatras alongside adds beauty to the trip. The essence of Kathmandu is culture and heritage. The cultural festivals and feasts are popular in Kathmandu and you can explore a lot of vibrant places of traditional merits in the Kathmandu valley.

Some of the major chariot festivals in Kathmandu that are mainly associated with the tradition of the Newars are Seto Machhindranath Rath Jatra, Rato Machhindranath Jatra, Bisket Jatra, Indra Jatra, Gai Jatra etc. The Jatras and festivals in Kathmandu provide different perspectives about the cultural celebration. These festivals and Jatras are said to have emerged during the medieval centuries and mainly associated with the rulers and kings of that time. The superior person of the Kingdom and the god belief system is found in the historical background of the festivals in Nepal.