Rato Machhindranath Jatra is known as Bungadyo (Newari language), the god of holly rainwater harvesting for local Lalitpur district. This festival is the longest-running chariot in Nepal. The name “Rato Machhindranath” literally translates into “Red Fish God”. Rato means ‘Red’ and Machhindra means ‘Fish’ and Nath means ‘God’. People worshipped centuries for rainwater and their great culture pulling the chariot of Rato Machhindranath at Lalitpur, Patan town every year. This festival is held in the month of Chaitra or Baisakh in Nepali calendar (April or May). The chariot is about 32 feet long which is an incredible chariot in Nepal alone. The chariot is made up of cane, wood, bamboo.

The Rato Machhindranath is special chariot festival celebrates in Lalitpur, Kathmandu, Nepal. The chariot is pulled around Patan town and is stopped at many places during the duration of the festival. The procession starts at Pulchok and passes through Gabahal, Hakha, Sundhara, Lagankhel and ends at Jawlakhel. This takes almost a month to end. When the chariot procession starts, thousands of people assemble to observe and worship the fair. 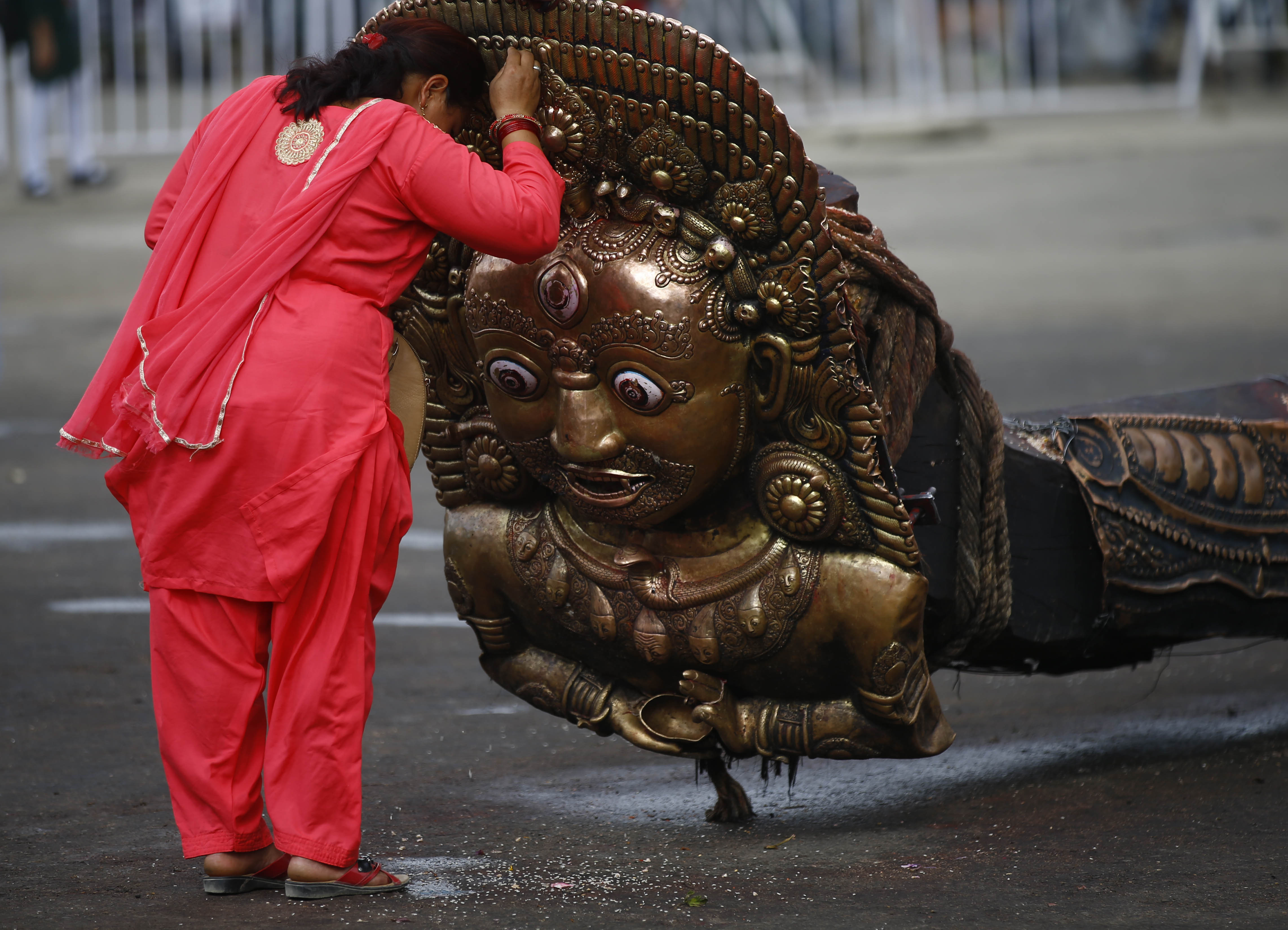 This festival is specially celebrated by Newar Jyapu Community of Patan Lalitpur. Jyapu is an ancient agricultural profession for centuries in the town. The entire musical instrument arrangement is made by Jyapu community during the festival.

Rato Macchindranath Jatra is a most significant and vibrant festival that embarks hundreds of people to celebrate and carry the chariot in the street of Patan.

The Rato Machhindranath Jatra Festival is one of the popular festivals in Kathmandu valley. Rato Machhindranath is also known as Bunga Dyah in Newari Language which also stands for the worshipping procession of the giver of rain. The puja is also revered as Raktalokitesvara Karunamaya which is Red Machhindranath. Begins in the 4th day of the bright fortnight of Bachhalā, Which is the 7th Newari lunar month according to Lunar calendar. 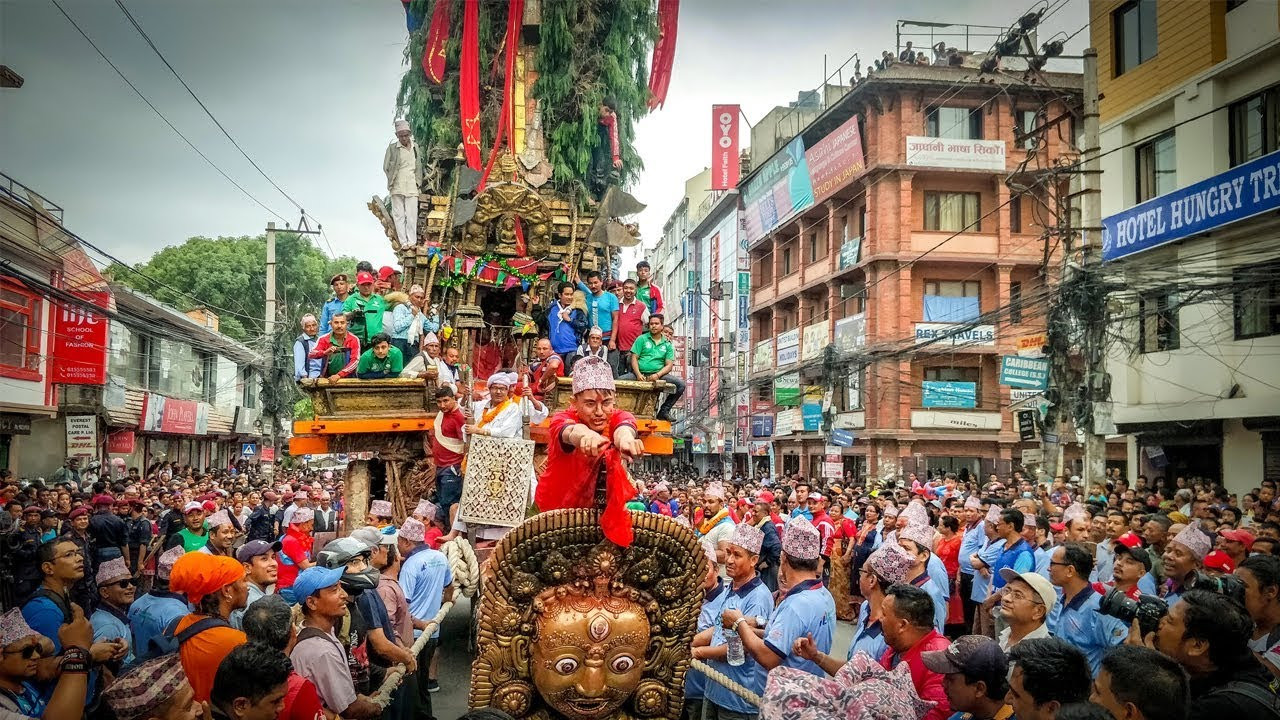 In the reign of Narendra Deva during 600 AD, the chariot procession of rato Machhindrath was inaugurated after the end of disastrous aridity in Kathmandu valley. The chariot is constructed with the help of 60-foot tall linga in Pulchowk, nearby Krishna Mandir Patan in Lalitpur. In the chariot, the image of Bunga Dyah or Rato Machhindranath is installed and the procession begins. The chariot procession is accompanied by another small chariot in which the Bodhisattva deity Chākuwā Dyah is placed.

The chariot procession begins from Pulchowk accompanied by the huge mass of Kathmandu valley. The procession then moves towards Gabahal, Mangal Bazar, Hakha, Sundhara, Chakrabahil, Lagankhel and ends at Jawalakhel. In a particular place Iti and Thati, the chariot is pulled by women and in other places, both men and women of the Newar community contribute to pulling the chariot to different places. At the end destination of Chariot in Jawalakhel, the festival concludes with some festivities such as display of Bhoto. Bhoto is a traditional Nepali vest wore by children.

The Bhoto Display Jatra is a major concluding procession of the Rato Machhindranath Jatra. This festivity is held according to the astrologers after choosing an auspicious occasion. The head of state and government official climb the chariot and display the Bhoto to the general public. The legend behind the display of bhoto in Rato Machhindranath is, a Newar farmer lost the vest which he had received from a serpent god Karkotaka Naga. The farmer had made some favour to the god in return of which the farmer received the vest (Bhoto). There are two prevalent legends behind the receiving of Bhoto from god by the farmer. One is Newar farmer helps him with the ayurvedic medicine which helped to heal the god’s ill wife. Another legend is the god asked for some herbs to the farmer about which he had no idea but he gave him the dirt from his sweaty body which healed the ill wife of  Karkotaka Naga. 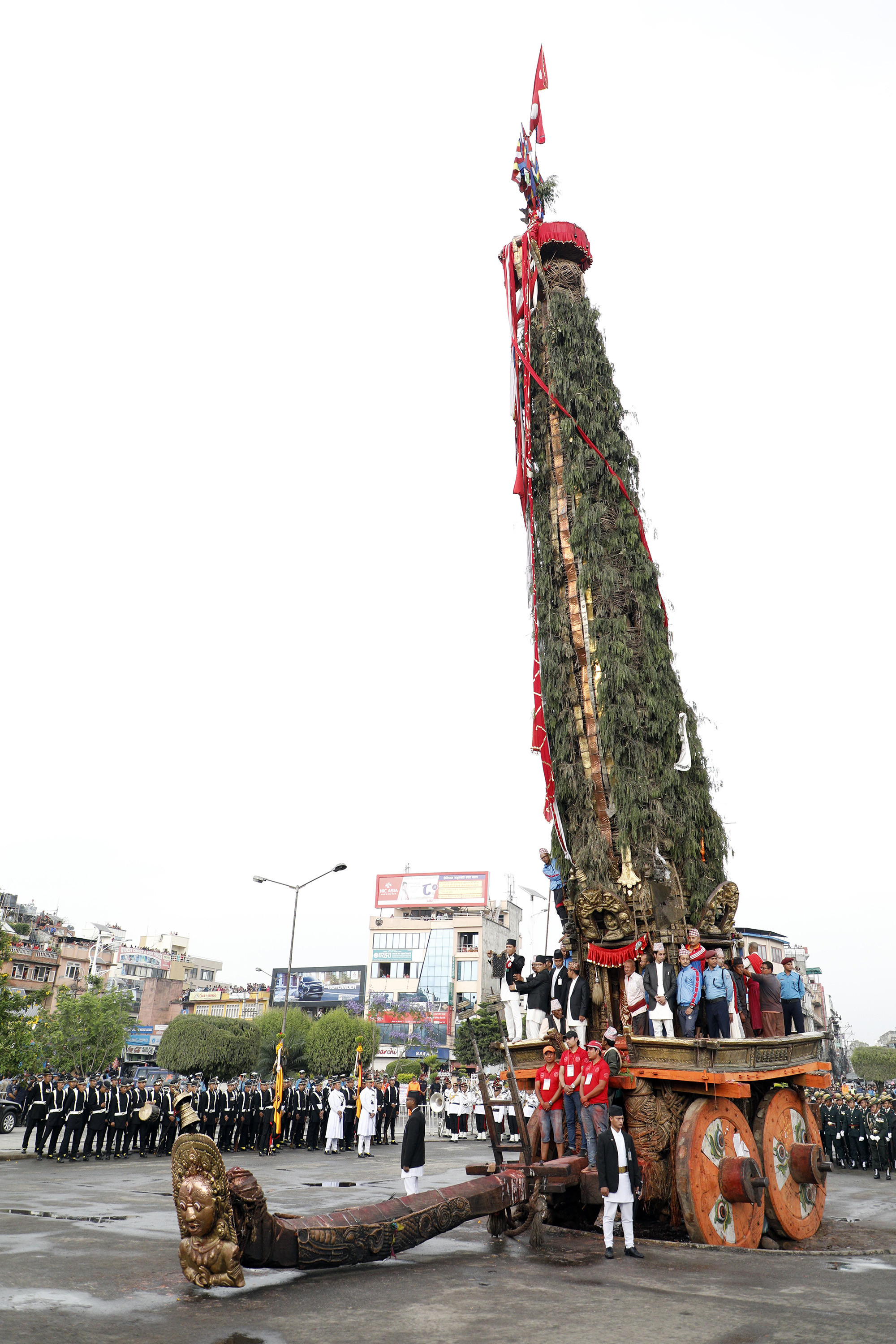 Once the farmer saw his missing garment wearing by someone during the chariot festival. He claimed it to be his belonging but in the quarrel neither the party had any idea about the proof that claims the ownership of the garment. Both the parties then agreed with a term that the Boto would be kept with Bunga Dyah or Rato Machhhindranath until the rightful owner claims it with sufficient proof. Since the time, the Bhoto procession is a major part of the Rato Machhindrnath Jatra and annually displayed to the public.

The Bhoto is also observed by the Living goddess Kumari in Jawalakhel during the Bhoto display procession. After the Bhoto display festivity, the chariot is dismantled and kept in a particular place for another procession. The photo of Rato Machhindranath is taken to the temple in Bungamati. Bungamati is a village which is also known as the home of Rato Machhindranath or the god of rain.