The Honey hunting in Nepal has been practised for a thousand years and it is the vital part of Nepali culture. People with good knowledge of rock climbing can easily do honey hunting tour. The wild honeybees make the beehives on the rock, often nearby the waterfall. The honey hunters of Nepal documents Gurung tribesmen of west-central Nepal entering the jungle in search of wild honey where they use indigenous tools under precarious conditions to collect honey. Normally honey hunting locations are located in the Himalayan range and countryside area. It is one of the oldest traditions in rural areas of Lamjung, Kaski, Myagdi and other parts of Nepal. It is the main indigenous Gurung and Magar Community in Bhujung and Pasgaon in Lamjung District.

Some major places for Honey hunting in Nepal

Honey hunting has become one of the major attractions in the annual Siurung Festival being held in Lamjung district currently. Honey hunting program is launched to protect the tribal ways of life and keep the tradition with the help of sustainable tourism in Ghale Gaun. The practice of honey hunting is in the steep hills of Ghanpokhara, Khudri, Taghring, Bhulbhule, Bhujung, Dudhpokhari areas of Lamjung. It has become a source of income and has been attracting tourists from all over the world. 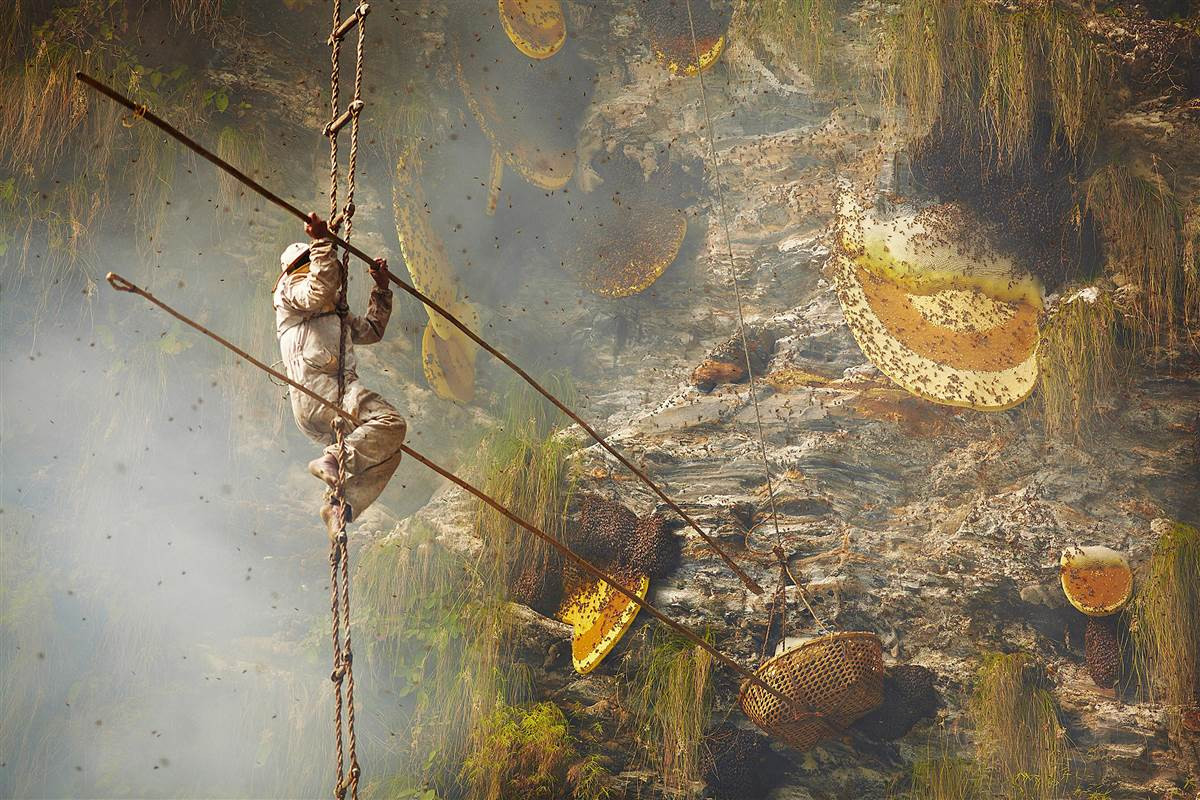 Kaski district is most notable for honey hunting destination in Nepal. Local honey hunters revealed that 26 cliffs in Kaski District are sites for Apis laboriosa colonies. Apis laboriosa is a migratory species. It has a calendar for the approximate time of year when the bees arrive and depart. People carry out the tradition of hunting at the right time, looking after the hives. There is a discussion of social and economic aspects of the honey hunters, and consideration of honey hunting events as entertainment for tourists. 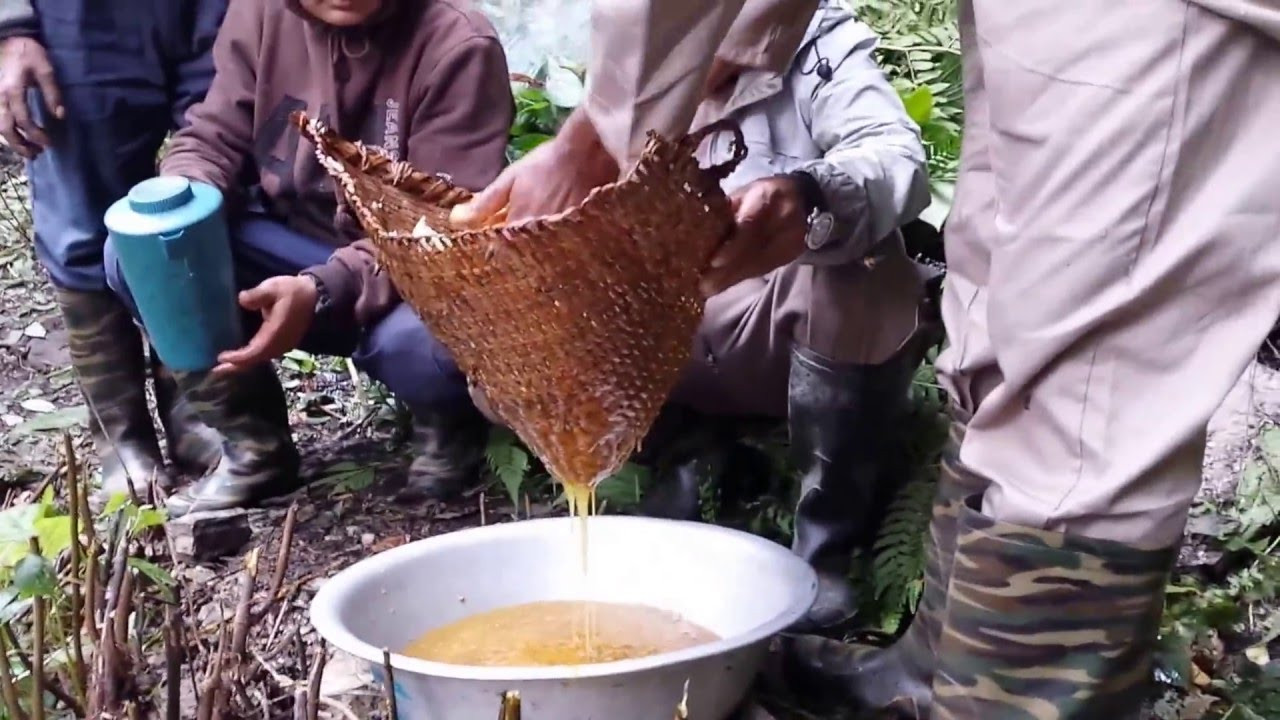 Myagdi is another place popular for honey hunting activity. Akkare hills in Myagdi are popular for honey hunting. People have a tradition to carry out honey hunting in Myagdi. People of Myagdi makes a ladder of Bamboo stick to climb the hill while maintaining safety standards. However, the leading people there do not wear any belts to avoid accidents, but they are mentally prepared for the worst and they use a bamboo stick to make the climb easier. Bees in winter migrates down because of the severe cold. But in Summer bees move to the Upper Hilly region during the months of April. But spring is favourable for wild bees, they find a good garden with bloomed flowers and beautiful plants. So, generally in the month of March, bees make more honey. The late March and early September are, however, the best time to perform honey hunting. 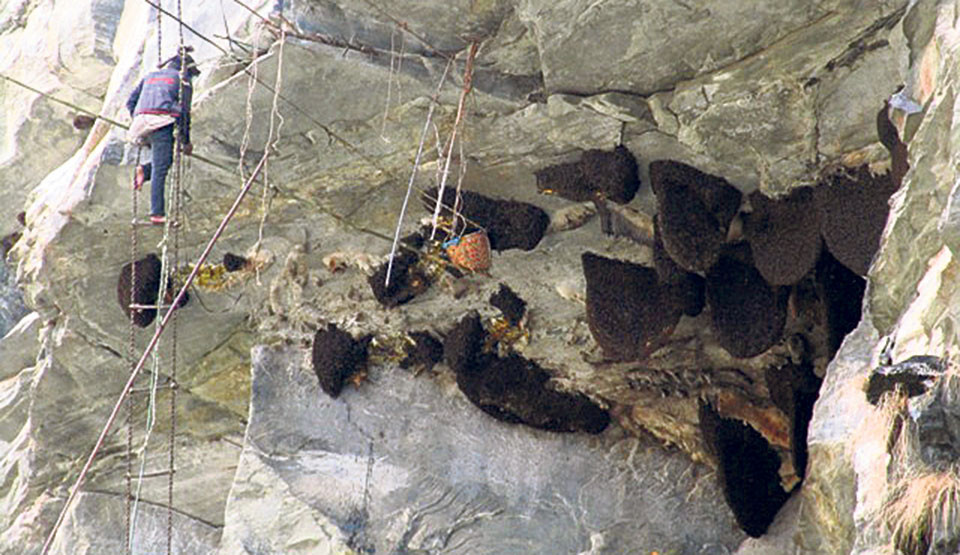 Significance of carrying out the tradition

People organize religious ceremonies before collecting honey to protect themselves from the attack of honeybees and any mishappenings. The local people celebrate honey hunting as a festival by offering flowers, grains, and sheep to God before hunting. Honey hunting is a very old tradition in the mountainous region of Nepal.

It is undertaken by experienced villagers who hang from cliffs as tall as 300 m high with the help of homemade ropes and Bamboo ladders. The lead honey hunter collects honey in the bucket from the beehives and passes down to another person. This wild honey was used in ancient times for a medical purpose. It still exists and has medicinal value with a great deal of money in the international market. Right before the hunting, worship takes place to respect the hard work of honeybees and their contribution to the survival of human beings. 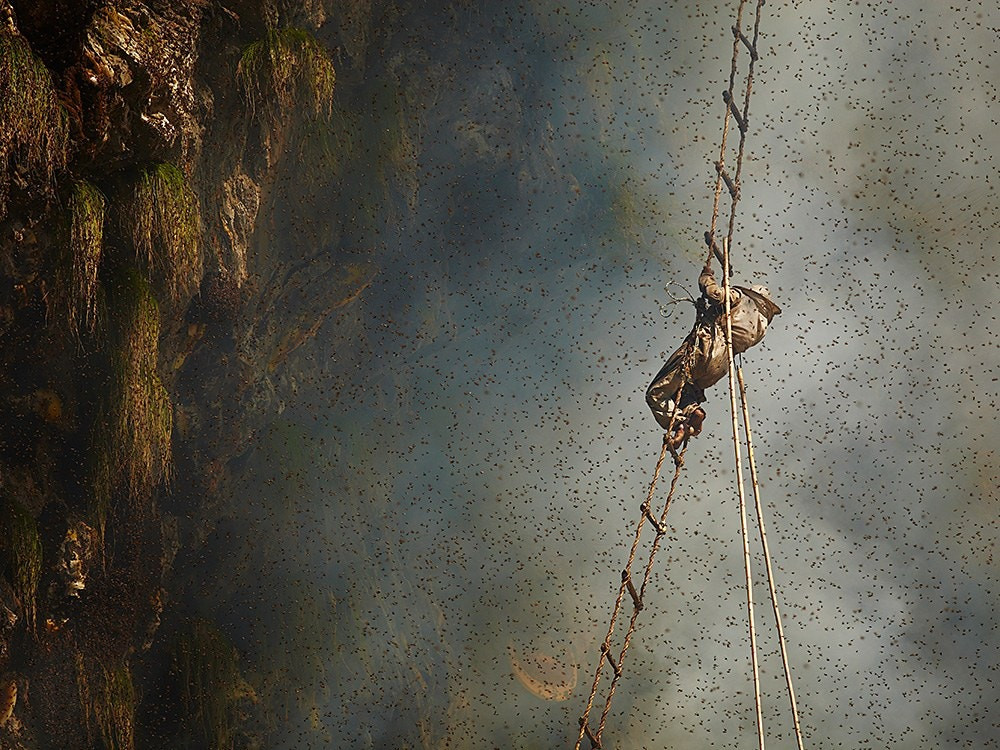 Honey harvesting usually takes place twice a year, when honey hunters get together and head into the Himalayas to take on this massive task with the risk of life. To harvest one colony takes the honey hunters two to three hours depending on the location of the hive and its size.

Skin wounds can be completely cured by smearing honey because it has antiseptic and healing properties that not only help to prevent infections but also accelerate the healing process. Honey helps to reduce cholesterol levels. Honey acts as a medicine and in use worldwide. It works in different cases like it relieves cough, prevents constipation, helps to lose weight, strengthen the heart,  prevents dry skin, reduces cholesterol and other more. 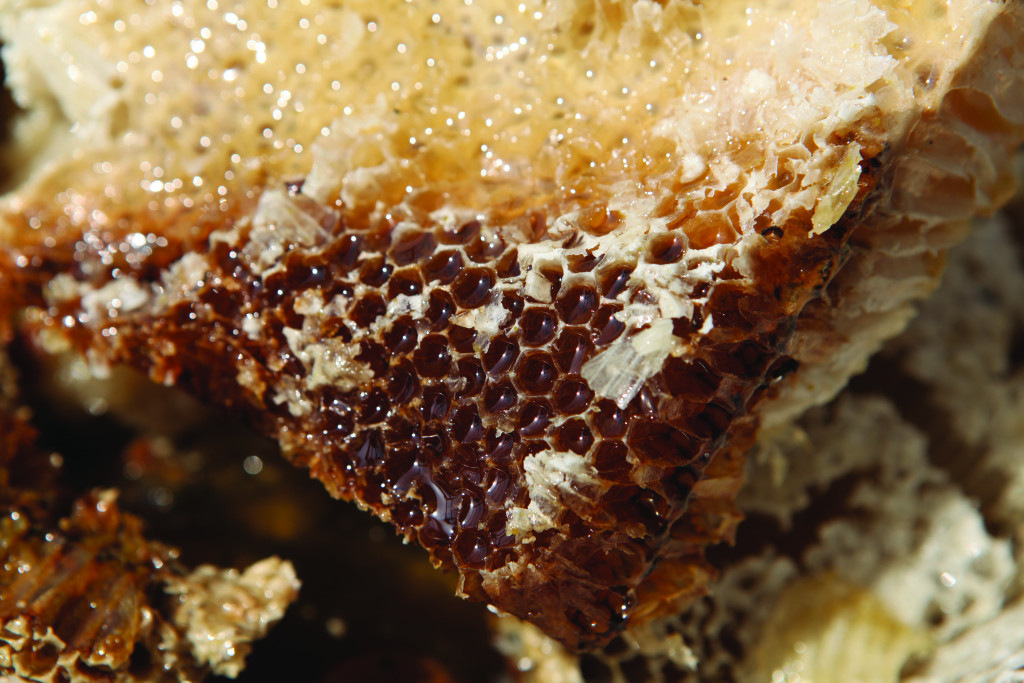 Autumn (September to November) and spring (March to May) are the best seasons for honey hunting in Nepal. The weather is perfect these seasons. The sunny day is outstanding for the clear mountain views. It is customary to collect honey during the spring and autumn seasons. 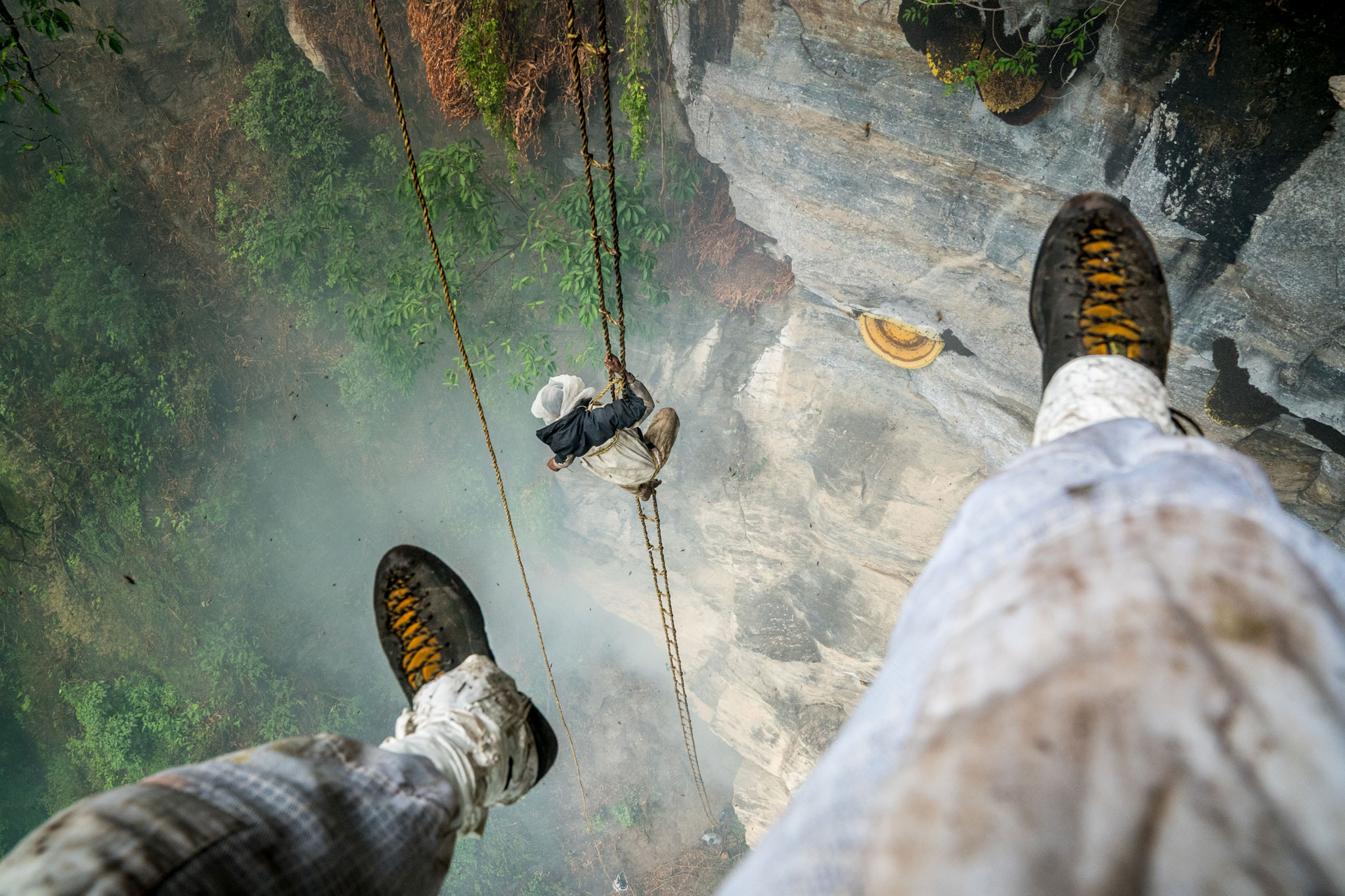 Commercialization of honey in Nepal

In Nepal honey produces around 2,000 tonnes of honey annually. According to the figures of the Trade and Export Promotion Centre, 2,400 tonnes of honey imported in the last fiscal year, up from 2,000 tonnes in the previous fiscal. Many traders have started branding and packaging their products in Nepal. Nepal Honey, Himalayan Honey, Gandaki Honey, Gorkha Honey, Namaste Honey, Shakti and Himali Honey are some of the brands in Nepal that have been competing with Indian brands like Dabur and Patanjali Honey.

More than 50,000 farmers are directly and indirectly involved in honey production. While there are more than 100 cooperatives maintaining 25-300 beehives each. A single beehive yields around 35 kg of honey annually.