Hundreds of annual festivals are celebrated in Nepal throughout the year. Gaijatra festival is one of them. It’s a major festival among Nepalese Newar communities, especially in Kathmandu valley. This festival generally falls in the month of Bhadra. The name Gaijatra is made from two words. ‘Gai’ means Cow and ‘Jatra’ reflects a parade, so this is the festival of a cow. Traditionally, this festival is celebrated to keep alive the memories of the death of the loved ones in the family by leading a cow in the street. If the cow isn’t available, then young kids are dressed up as a symbol of a cow, which is considered a fair substitute.

In the Hindu religion, people have faith that the cow will help the departed soul to go to heaven. They show their honour to the death of their family members. Gaijatra festival is about remembering their late family member.

According to history, late king Pratap Malla announced the celebration of the Gaijatra festival in the 18th century. At that time, he was the powerful ruler of Kantipur (today is known as Kathmandu). The Queen of Pratap Malla was extremely depressed after the death of their very young son. King tried with all his effort to bring smiles on the Queen’s face, but no one could cheer her up. After all things, the King announced to take out a procession from each house who had lost their family member in the same year. 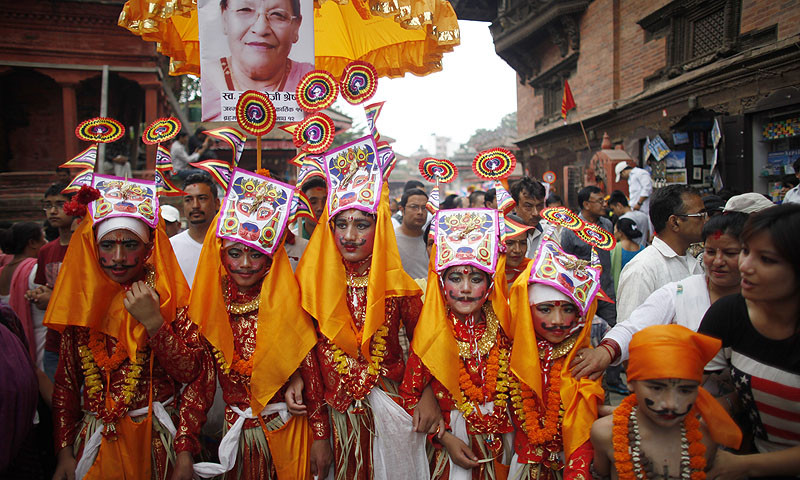 He also ordered the people to do as many fun things to bring a smile on Queen’s face. As per the King’s order, the people took out the procession from their homes by dressing as a cow and funny makeup on their face. She smiled at that moment and got relieved. Finally, the procession helped the Queen to understand that many people in town had lost their family members. From that moment on, the Gaijatra festival has been celebrated in Nepal.
Gaijatra festival is also regarded as the day of liberty to talk, raise their voice, satirize the system and the government. Various entertaining programs are organized during the festival by a group of comedy artists. People also enjoy the time with jokes, funny songs, drama and humour until late evening at a similar kind of entertaining program.

Gaijatra festival in Nepal is a meaningful event of the year for many families who lost their loved ones. Kathmandu Valley (Kathmandu, Lalitpur and Bhaktapur) is the place where this festival is celebrated widely by Newar Communities. The government gives a special holiday only inside Kathmandu valley during this festival.